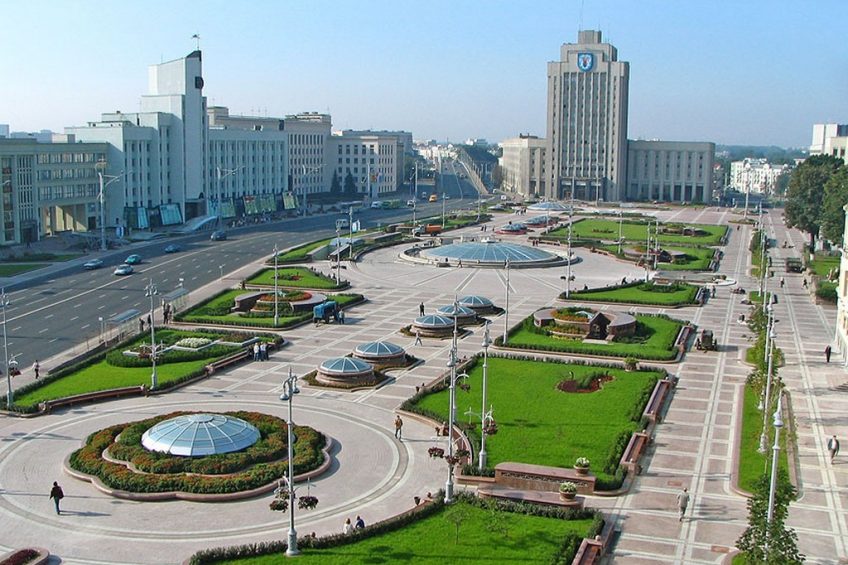 The National Airport Minsk is the major international airport in Belarus. There are flights to other airports in other towns, though they are not that large-scale. The Minsk airport is located some 50 km (30 miles) from Minsk. The airport facilities include a bank and exchange office, a post office, a taxi service, a nursery, several restaurants, bars, duty-free shops (for departures only).

Upon arrival to the National Airport Minsk and before passport control there will be a consular service desk (if you need a visa) and an insurance agent.

To get to the city from the airport you basically have three options – to take a bus (~€1), take a taxi (~€20) or rent a car. Buses depart every hour from 7 am to 10.30 pm. Buses arrive in Minsk to the Central Bus Terminal (which is next to the Central Rail Terminal). Taxis are available at the airport every time there are arrivals. A car rental office is at the arrivals terminal.

Rail
There are regular trains between Minsk and practically every major capital in Europe. Most Belarusian towns can be reached by railway.

The new Central Rail Terminal in Minsk offers all the services a traveler needs, most of them are available 24/7. Restaurants, bars, a game zone, a waiting room, a locker room, shops, a pharmacy are to name a few. Everything is signposted with easily recognizable pictograms.

Public transport network connects Central Terminal to all the parts of the city.

Bus
There are several bus stations in Minsk, though most of international arrivals come to the Central Bus Terminal. This terminal offers few facilities of its own, maybe because it is next to the Central Rail Terminal, which has all of those.

By car
A payment for entering Belarus and for transit through its territory is required for all vehicles (except for non-transit passenger cars entering Belarus). The fee ranges from US$ 20 to $155. Besides you will be required to fill-in the details of your vehicle into the customs declaration and purchase a motor-car insurance (that’s apart from a personal insurance). Insurance by few foreign companies are accepted. Insurance agents are present at every border crossing point and the charge ranges from € 5 for 15 days to € 53 for a year.

There is one toll highway (M-1 / E-30) in Belarus from Brest to Moscow, the fee ranges from US$ 1 for passenger cars to $15 for large trucks.

The Belarusian currency is called “rubel” though Russian variant of the name “ruble” can be (and is) used with relation to Belarusian money.

Currently there are notes ranging from 1 to 50,000 rubles. No coins are used in Belarus for circulation. Only a small amount of commemorative coins is produced.

For the use in metro there are special plastic cards and tokens. Smart cards (plastic cards with microchips) are used for public payphones.

There are not many vending machines in Belarus and if there is one – it would accept paper notes (as do coffee machines at many commercial centers) or tokens will be sold somewhere at a nearby newspaper stand or other small retailer.

There are numerous currency exchange offices in Belarusian cities to change foreign currency to Belarusian rubles and back. Normally there should be no problems with exchanging US dollars, euros and Russian rubles.

Plastic cards
Credit and debit cards were not used in Belarus before the last decade of the previous century. And even today the use of plastic cards is rather limited.

Nevertheless, major hotels, restaurants, stores and service outlets accept credit/debit cards issued by Visa and MasterCard. Some other brands can also be accepted but not everywhere
NOTE:
Discovery and American Express cards are not accepted at all

NOTE: Some cases were reported when an issuing bank (US) has frozen a credit card account after some payments were made in Belarus “as a precaution measure”. The restrictions were lifted only after a cardholder called back to his bank and confirmed that he actually is making payments in Belarus. Thus, a good idea would be to call your bank in advance and to ask them not to freeze your account when you use your card in Belarus.

ATMs
There is a growing network of ATMs in Belarus. At present there are almost two hundreds of them in different cities of Belarus. The majority of them are in Minsk (over 50).

Sending money to Belarus
If you need to send money to Belarus (to friends, relatives, or ask someone to send you some extra money) the fastest and easiest option (though not the cheapest) is Western Union. One can even send money over the Internet using a credit card and a recipient will be able to get the money from one of the numerous bank branches in Belarus.

The other, sometimes less expensive but more lengthy and complex way is to send an international money order or a check. However not all kinds of checks are accepted (e.g. personal checks) and fee for cashing varies from bank to bank (normally 1-5 per cent but not less than US$10).

Please note, that all the money that the residents in Belarus receive from abroad are considered their income and will be reported by the banks to appropriate local tax offices. The recipients of your funds will have to pay taxes on the money they receive.